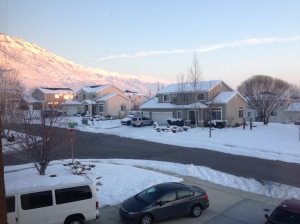 Sprawl near my home in Utah

More and more, sprawl is described as a government-funded scam, a Ponzi scheme that requires endless new investment just to stay afloat. But an article in the Jan. 27 issue of The New Yorker inadvertently raises a curious question: so what? And: can it survive anyway?

The article profiles L. Brooks Patterson (sorry about the paywall), Michigan’s despicable-sounding but highly effective Oakland County chief executive. Patterson’s county is adjacent to Detroit and, in contrast to Motor City, thrives because it has managed to attract international companies and rich people fleeing the city.

It’s also aggressively suburban, apparently. The article describes a stroad-like eight-lane highway in the county and Patterson is quoted as saying “I love sprawl. I need it. I promote it.”

That’s a vicerally cringe-worthy statement — at least for smart growth-ers — because it captures the economic recklessness underpinning sprawl: the only way for sprawl to keep going is for more and more people to keep buying into it. Because sprawl is too dispersed and too expensive to build — think big, wide government-funded streets that serve tiny numbers of people — it’s always on shaky financial footings.

So, Patterson’s Oakland County really does need sprawl in order to maintain its prosperity. It’s like Rome carrying the spoils of war back home; if that’s your economic plan you just have to keep move further and further out, going after tougher targets — and in Patterson’s case that means more international business and more sprawling development. Forever.

Which, I suppose, is fine. Patterson openly acknowledges as much. It’s a provocative thesis because it accepts the economic criticisms of sprawl but calls them attributes instead.

Time will tell if this suburban county is right, but it’s difficult to imagine history going in its favor. For one thing, the article itself foreshadows coming trouble; the mayor of nearby Detroit points out that younger people increasingly eschew suburbs in favor of cities. Later, the article forbiddingly quotes Richard Florida as saying that Oakland has “it easy. They have wealthy people and virtually no poor. They have the upsides without the costs. How selfish.”

More importantly, the strategy seems fundamentally unstable, as many sprawling communities are now learning. Just days before the New Yorker piece, The Atlantic Cities ran a story about another upscale suburb, this time in Illinois, that could no longer fund its roads. And as author Eric Jaffe points out,”it’s an uncertain time for public roads in general.”

In any case, it’ll be interesting to watch places like Oakland County over the next five, 10, even 20 years. If Patterson is right, good management is enough to keep them thriving. But if he’s wrong, these places are going to have to grow smarter, not just bigger.