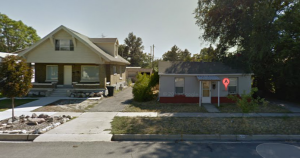 The oldest home in Provo, on the right.

But this situation also raises another important issue: moving all historic buildings into one little “historic building theme park” is a mistake. Instead, cities should embrace spread-out sites as ways to attract visitors, educate residents and stimulate the economy.

Visiting any city with a group of historic sites — where moving from places to place is half the fun — should make that point apparent, but one of the best examples I’ve seen of this idea in action is Boston.

In Boston, an array of historic sites are linked together along the Freedom Trail, a 2.5 mile walking path in the city core. The trail is marked by a red line on the sidewalk and meanders leisurely passed sites that played significant roles in the formation of the U.S.

The Freedom Trail passes by Paul Revere’s home, on the right.

It’s worth noting here that Paul Revere’s home was occupied for a very long time after (and before) it’s most famous resident used it. The house was even modified beyond recognition, much like the oldest home in Provo was, and many other homes from that same era actually were demolished. This area also became something of a slum for a long time.

All of which is to say, Paul Revere’s home could easily have been destroyed, but if it had, imagine the historic loss. I think that offers a lesson for Provo right now, and for Utah generally.

In any case, the Freedom Trail is a delightful part of Boston and shows how spreading historical destinations throughout a city is smart.

For starters, the trail is a very cheap piece of infrastructure. It’s marked by paint or bricks and follows a sidewalk that would already have existed. Most cities could probably afford a six inch strip of paint down a sidewalk and this is kind of like getting a whole museum for the cost of painting a single room.

A historic square on the Freedom Trail. I used this square to eat pastries I bought at a nearby bakery.

The Freedom Trail also spreads the economic benefits of tourism out over a wider area. When I walked the Freedom Trail, I stopped and bought food or drink several times along the way in several different neighborhoods. Many of the sites also had gift shops, which tended to be full when I visited.

If all historic sites are centralized in one location, on the other hand, only a small handful of businesses benefit. I also suspect that overall spending is reduced by concentrating sites; I tend to spend more money if I’m out walking around than if I’m sitting in one spot for an afternoon.

Temple Square in Salt Lake is perhaps illuminative; the site itself is delightful but just a block or two away the city suffers from crushing dilapidation.

Keep in mind also that in Provo, there are almost no businesses immediately adjacent to North Park, where many old pioneer buildings have been clustered. That means there’s little economic benefit at all to having this site (though there are other benefits of course).

However, there are businesses between the home slated for demolition, the park, and other sites. Encouraging people to walk from site to site, then, would give them new opportunities to experience Provo’s culture and stimulate the economy. It’s a win-win.

There are other benefits of Boston’s Freedom Trail:

• The trail itself is free, meaning visitors can chose how much to spend in local businesses. As a fairly frequent traveler myself, I tend to appreciate cities more when they have free things to do. I also tend to see those cities as places to splurge a little more on food or recreation.

• It’s customizable. If you get tired, you can stop. If you have a lot of energy, you can jog (I saw several jogging tours while I was in Boston). I saw children, elderly people, families, people in wheelchairs, and others all doing the Freedom Trail.

• The “in between” spots that get overlooked in most cities suddenly become interesting. It took me a long time to do the Freedom Trail because I kept stopping to look at buildings that were on the path, but not marked as destinations.

• It’s adaptive. It’s fairly easy to add or subtract sites, depending on their state of preservation, etc.

Boston is unique because it has more history that almost any other American city of it’s size. But this idea can work in smaller places as well. Case in point, Chepstow, Wales.

When I visited Chepstow earlier this year, I discovered that the town had a similar historic, self-guided walking path:

Markers on the sidewalk in Chepstow, Wales, include historical information and walking directions.

As an old-world town, Chepstow’s sites are much more ancient than anything in Utah cities. But Chepstow is so small that it actually has fewer sites than there are in Provo. If this idea can work there, it can certainly work in Utah too.

To be honest, I don’t know why Utah cities haven’t rolled out this idea already. Both Salt Lake and Provo are full of old places that people (including me) find endlessly fascinating. But in any case, these examples show that moving every old building into one moderately-used park is the wrong way to go about historic preservation.