Granary Row does a lot of amazing things — including generally showing the potential of wide streets — but among the most significant victories is solving the height-to-width problems of Salt Lake Cities streets.

In case you haven’t visited it yet, Granary Row is a kind of pedestrian mall/urban park/retail village built out of shipping containers in the middle of a very wide street. It’s the kind of thing often referred to as “pop up” urbanism because it’s temporary, inexpensive and fast to built.

And of course, this week I’ve been writing about how buildings should be at least as tall as their street is wide to create the sense of enclosure that people tend to find inviting.

Here’s what Granary Row looked like earlier this summer:

As you can see, Granary Row was built on a very wide street. I haven’t measured this area, but I’d guess it’s in the range of at least a 1:6 height-to-width ratio, which is a disaster.

However, Granary Row broke up that space, showing that it’s possible to take those disconcertingly wide expanses and realign them, effectively creating a series of small squares: 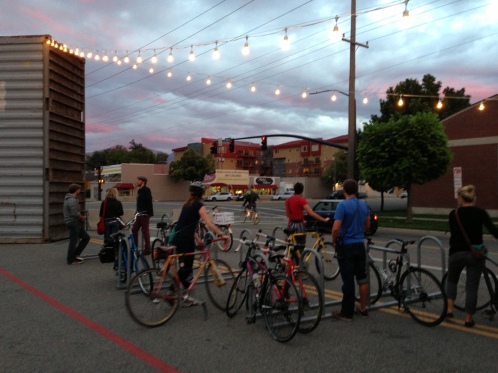 As I hope these pictures show, Granary row is made up of a series of distinct little spaces. Height-to-width ratios vary, but they’re all in the 1:3 to 1:2 range, which is a huge improvement over the wide street that existed before.

Most importantly, Granary Row changes they was pedestrians perceive the space. Previously, it was just a long expanse running east to west:

In the picture above, the red arrows show how this space worked before Granary Row arrived. It was a continuous, non-human-scale place that was more than a little bit awful to experience. Like much of the Granary District, the expansiveness of the space and streets overwhelmed whatever cool, post-industrial grittiness the buildings should have created. In many ways, it felt like a neighborhood-sized parking lot.

But Granary Row used that expanse to create a bunch of little spaces with north-south orientations:

The spaces created by Granary row, represented by the green arrows in the picture above, feel inviting and comfortable in comparison to the old street. Clearly, they are more “human scale.”

That happens, I think, because among other things the height-to-width ratios are pretty good on Granary Row. Whoever designed it knew just how far apart to place the shipping containers to create areas that were accessible but visually distinct from their surroundings. Significantly, containers also were stacked, turned on end and otherwise aligned to create much-needed visual barriers with a pleasant balance of height and width.

Granary Row does so many things well that I’ll definitely be blogging about it in the future. But more than anything else, it shows that good spaces don’t happen on accident. They’re carefully and intentionally designed. And thankfully, as Granary Row as shows, they also can “pop up” without radically redesigning cities or chasing big investment money.